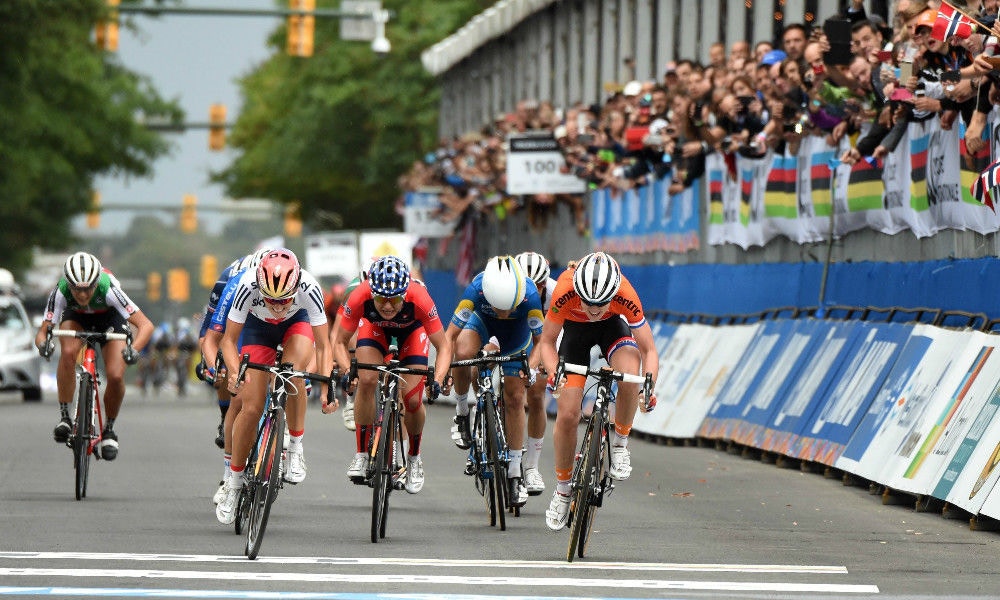 Despite leading a group of riders approaching the finish line, Armitstead waited until the perfect moment to unleash her powerful sprint to beat out Anna van der Breggen of the Netherlands by the closest of margins.

“It’s a dream come true, the rainbow jersey is the most special thing in cycling,” Armitstead said afterwards. “It was a complicated race, I had to make sure I kept to my plan and went for it on the climbs as hard as I could at the end. I was hoping other riders would come across and we’d keep it going, and I knew I was in good shape.

“I got on the front, I was leading and waiting for them to go for it, but it didn't happen. It was a strange sprint, but I kept them on the left-hand side and it went perfectly. I couldn’t believe I’d done it, I didn’t have time to celebrate because I was going for the line all the way.”

See also: See how close our pre-race predictions were

The race was one of the most compelling of the season. Nine riders got away with 26km remaining and that resulted in attack after attack after attack. Lauren Kitchen of Australia was very active launching multiple breakaway attempts, many of them closed down by Italian Valentina Scandolara.

The other Australian in the group, Rachel Neylan, was getting a free ride and things were looking good for the Aussies. Armitstead however, made the race forcing the pace on the final two climbs and shelling all but eight other riders with 2km remaining.

Armitstead led into the final long straight but attacks from other riders never came, and she was able to open up her sprint very late. No one could match her speed and she crossed a bike length in front of Van der Breggen. The home crowd had something to cheer about with Megan Guarnier of the USA capturing the bronze.

It was a dream come true for Lizzie Armitstead who will wear the rainbow jersey with pride throughout the 2016 season.