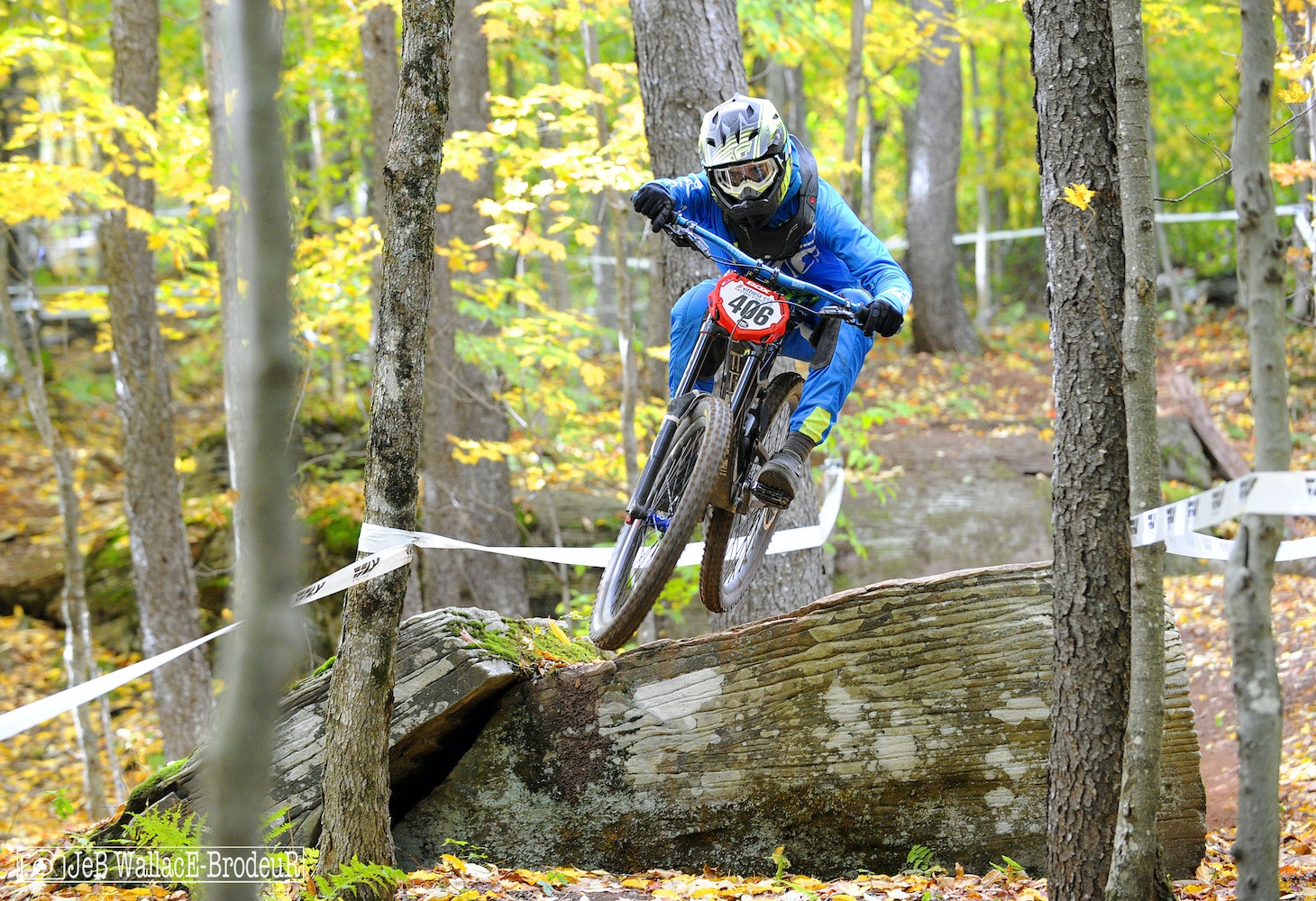 The 2016 Vittoria Eastern States Cup race season came to a climactic conclusion over the Columbus Day weekend with the crowning of the Atlantic and New England downhill series champions. The Plattekill Bike Park, which has hosted more ESC races than any other venue in history, was the fitting host for the final race. The steep flanks of Plattekill were draped in peak autumnal foliage as more than 150 racers gathered to sort out the season-long points races. With double points on the line, there was plenty of uncertainty until the last racer had crossed the line. The track was a challenging and varied and was located on the double chair side of the mountain. Like most courses at Plattekill, it knit together pieces of old and new tracks to offer a fresh experience for riders. The track offered numerous small and medium-sized drops, including a couple right out of the starting gate. After a fast, low-angled romp across the upper tier of the mountain the terrain steepened and racers faced a series of loose chutes connected by newly-built features and drops. The most technical section featured a widely taped plunge that offered numerous line choices through a minefield of slabs, trees and rubble. The lower portion of the track featured a several high-speed traverses linked by awkward and loose corners. A lofty booter sent racers rocketing across the finish line just feet from the base of the chairlift. The women’s pro race was won by veteran pro Mary Elges, racing for Bikeman. Elges has been mixing more enduro starts into her race schedule this season but showed she hasn’t let her downhill chops get rusty as she topped the field by more than three seconds. The men’s pro race was a battle of the heavy weights of East coast racing. Maurico Estrada, racing for IJ Racing and Intense, took home the win and a huge $2,250 payday by charging to a nearly three-second victory over fellow South American Frederico Vieira. The Vittoria ESC overall champions were crowned at Plattekill for both the Atlantic and New England race series. Lauren Daney and Sarah LeBlanc won their respective series championships with LeBlanc taking the super champion crown as she topped Daney, who took a courtesy run with a broken arm, to win the $1,000 bonus. That’s all folks. After nearly six months of racing at 25 events spread across seven states, the 2016 Vittoria Eastern States Cup season has come to a close. Be well and we’ll see you in the spring for another season of the country’s best gravity racing.