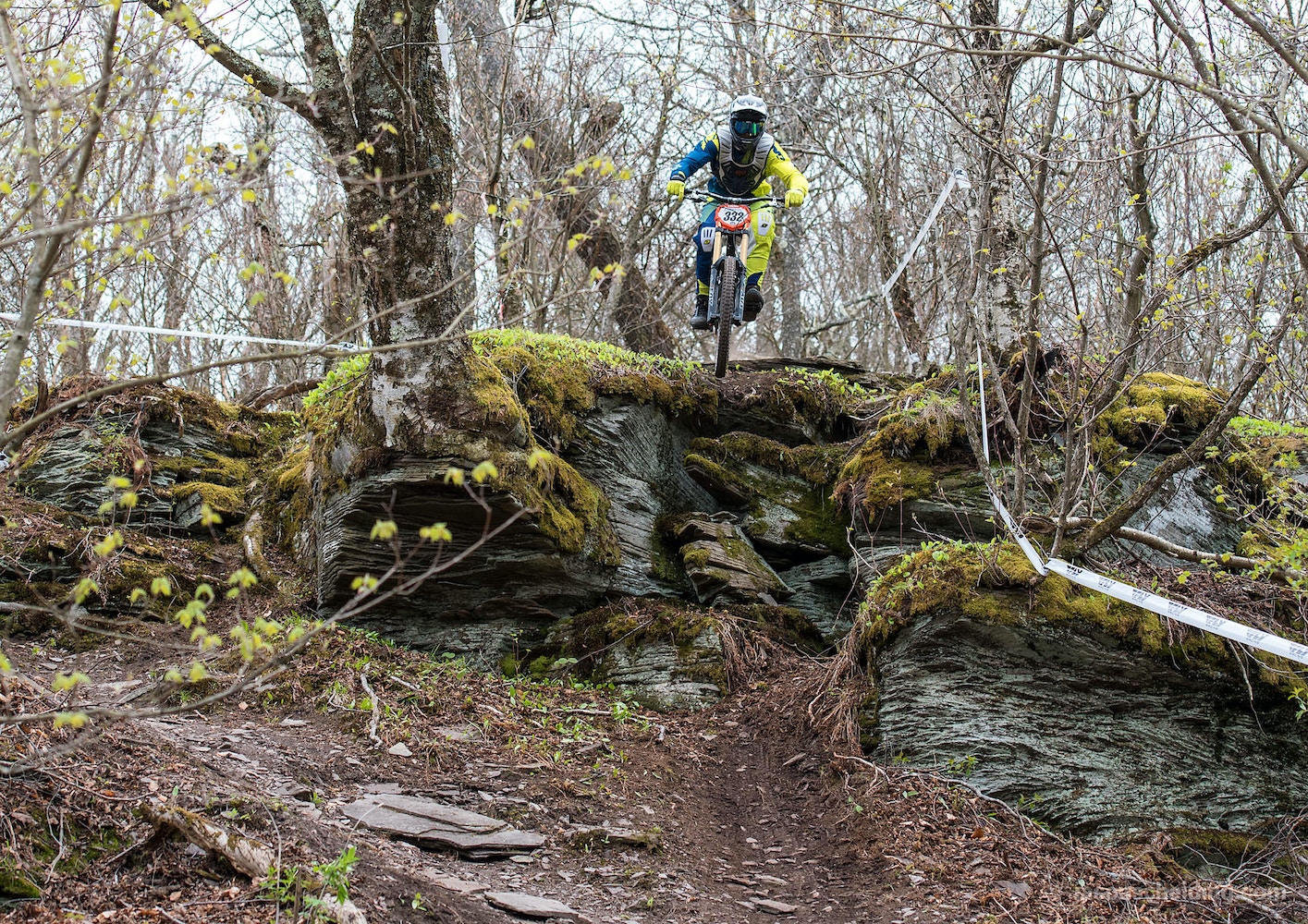 The big bikes came out of hibernation this weekend as the Vittoria Eastern States Cup Atlantic downhill series rolled into the Catskills of New York for the Plattekill Gravity Open. This was the first round of downhill racing in the ESC series and nearly 120 racers gathered to tackle the mountain’s famed flanks, home of some of the most legendary terrain in the country. The course, like most at Plattekill, blended elements of old and new to create a fresh race experience. The Getloose Downhill Racing Team, based at the mountain, put a lot of trail building effort into creating a smooth and fast track, though at Plattekill, smooth is a relative term. The race started at the top of the double chair and started by following the 2014 ProGRT track, won by Aaron Gwin. After a long traverse back to the lift line, the track joined the 2010 ProGRT course to the base of the mountain. The signature feature of this race was the newly-constructed “Chainsaw” road gap, dedicated to the memory of Stevie Smith. For the pro men, defending Vittoria ESC Atlantic downhill champion Mauricio Estrada returned to the top of the podium, a spot he also occupied at last season’s final ESC race at Plattekill. Racing for I racing and Intense Bicycles, Estrada has won five of his last six East Coast starts and the veteran racer shows no signs of slowing down this season. In second place, nearly three seconds back, was Isaac Allaire, racing for Transition, Troy Lee and Chuck’s Bikes. This will be third season as a pro for the young Vermonter who has quickly become one of the top podium threats at every race. MadKats Racing’s Tim White, another Vermonter, took home the third spot. Like a fine wine, White seems to be improving with age, finding the podium in four out of his last six ESC downhill starts. For the women, gymnastics coach Mary Elges, riding for Bikeman, picked up where she left off last year. The Vittoria ESC New England downhill overall champion for the past two seasons, Elges continues to put down consistently fast results. Canadian Arianna Vegter, a regular on the Ontario Cup circuit and racing for Knolly and Squire Johns, had her six-race win streak broken, taking second at Plattekill. Another Canadian, Jenny LeBlanc, took home the third spot racing for Cane Creek, just over a second back from Vegter’s time. The next Vittoria ESC downhill will be May 29th at Mountain Creek in Vernon, NJ