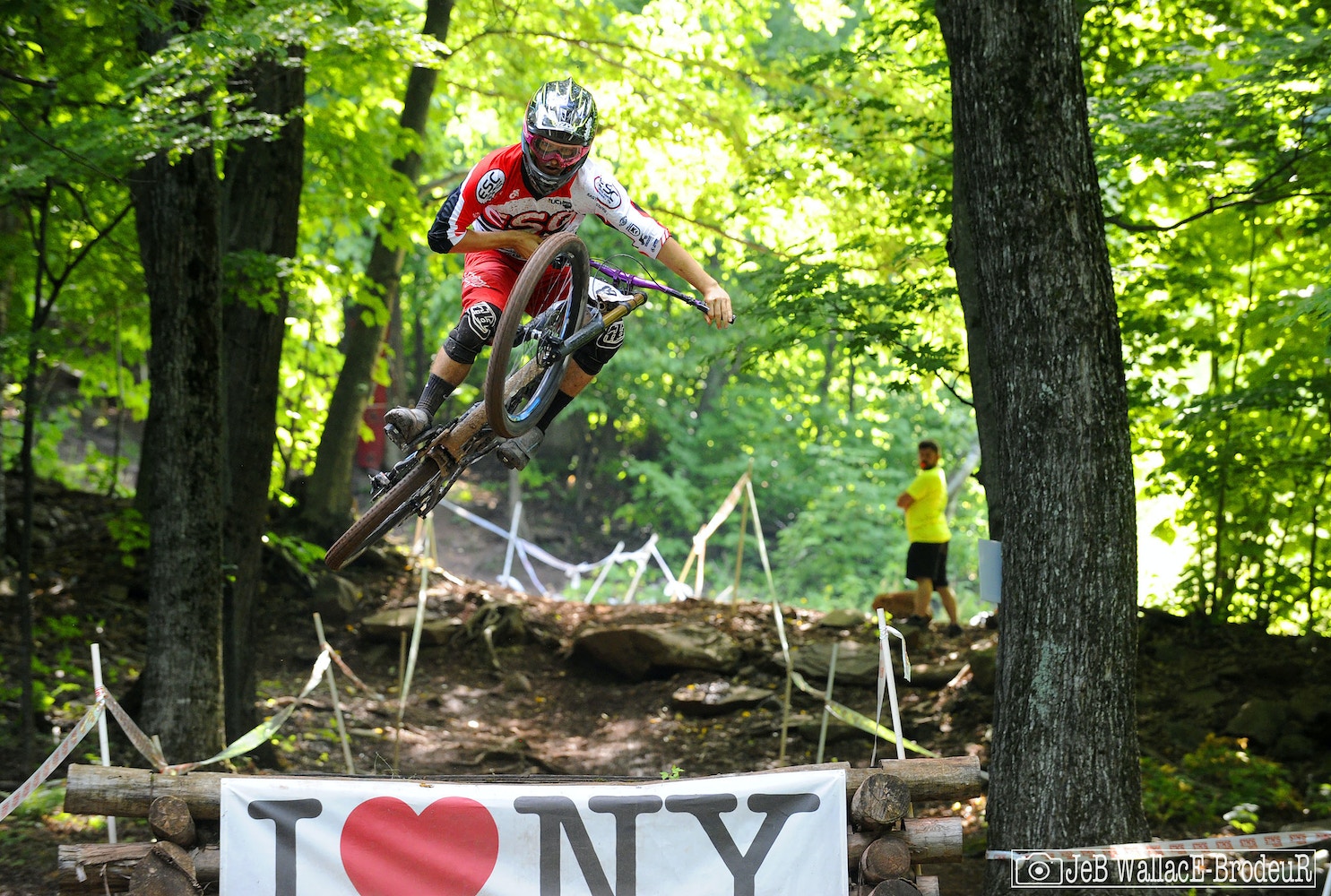 The thermostat was on high this past weekend as the ProGRT and Vittoria ESC downhill tours dropped in on a steamy Windham World Cup venue in the Catskills of New York. The race was the only UCI HC event on the U.S. race calendar and brought out a talented field of speedsters. Unlike the past many World Cups at Windham, when the track was a dustbowl, wet conditions were a big factor this weekend with passing thunder showers soaking the track on several occasions. A particularly strong storm rolled through on Saturday night, wreaking havoc of tents and pop-ups and knocking out power to much of the area. The course began in the rustic start house tucked in the woods at the top of the mountain. The track essentially followed last year’s World Cup course with a few modifications to the upper sections and the removal of the big features just above the finish line. The upper quarter had the steepest terrain with plenty of rocky drops and chutes that had riders locking up their rear tires and taking a two-wheeled slip-and-slide down the as they fought for traction. Leaving the woods, the track plunged down the infamous Bowling Alley, site of some heroic hucks from past events. After a raucous roller coaster in the woods, racers faced the legendary road gap and step down combo, always a big hit with spectators. The bottom half of the track was riddled with high-speed features, and compared to the tenuous steeps above, was a blast for racers to let loose on. The lower rock garden was the only interruption to the party train, with a sweaty jumble of rocks waiting to take down racers who strayed from their line. The big features lower on the track had been removed since the World Cup with a small step down over the Pro XC course and a couple tables the only remaining obstacles. The women’s pro race was won by Lauren Daney, riding for Patrol/110% Racing. Danny has been dominant in the Vittoria ESC series this season but hadn’t reached the top step of the podium in a ProGRT race this year until Windham. Daney topped runner-up Samantha Kngshill by more than five seconds. Shane Leslie, racing for the Palmer Project, topped a large men’s pro field, topping Giant Co-Factory’s Jason Schroeder by just under a second. This was Leslie’s first pro win in the national series and follows numerous flirts with the top step, including a second at the Angel Fire ProGRT in 2015.